Birding is good for your health

Birding is good for your health

Ever since I produced ‘Life of Birds’ with Sir David Attenborough in 1998, I have made films pretty much on birds alone. 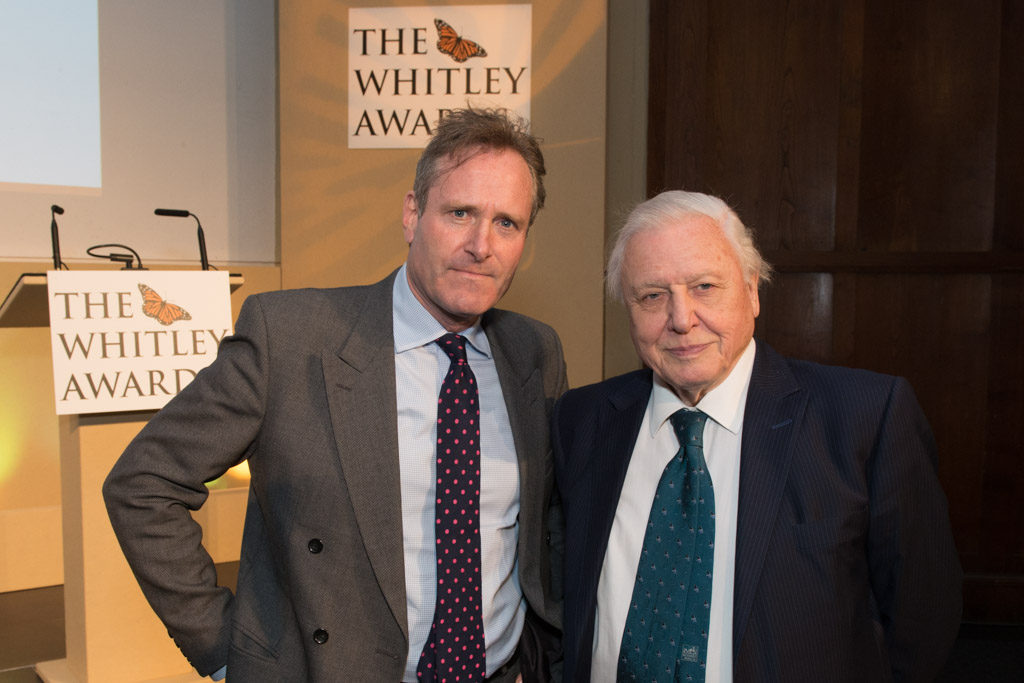 Birding is good for your health – Fergus Beeley & Richard Attenborough

I’ve been very lucky. As birders, I think we all know that we need to spend time in nature. I certainly do. I use pretty much any excuse to go out in the countryside and I’m happier. It’s clearly good for us: scientists like Dr Miles Richardson, Head of Psychology at the University of Derby have researched ‘people like us’ and ‘what we do’ and found that yes, people with a stronger connection to nature experienced more life satisfaction, positive effect and vitality. No surprise for us there.

However, birding specifically seems to go one step further. It hits pretty much every button needed for those like me that teach and practice something called ‘mindfulness’. Because of this, I’ve created special retreats around the world that bring people (that wouldn’t otherwise dream of going bird watching) together with birds and nature.

You might have heard the word ‘mindfulness’ being banded around rather loosely. Bluntly, it’s a simple and very powerful practice of training our attention. It’s simple in that it’s really just about paying attention to what’s happening here and now (our sensations, thoughts and emotions) in a non-judgemental way. It’s powerful because it can interrupt the habit of getting lost in thoughts, mostly about the future or past, which often generates more stress on top of the real pressures of everyday life.

With eyes focussed through the bins, in the peace of the hide, we look at the plumage and detail of the bird. We listen intently, in case an unusual call alerts us. We notice things that non-birders are surprised by: Flocks rising (to a peregrine overhead); alarm calls; differences; that fantastic spider right beside us in the hide! Here, in this wonderful mind space, we can feel the rim of the bins on our eyebrows, our feet grounded below us, the smell of the sea coming off the estuary. This moment of connection fills us to the brim with contentment and peace of mind.

As 10,000 generations before us have been doing just this, it’s hardly surprising we might also be glued to the landscape of the estuary. The wonderful Prof E O Wilson, who I met and interviewed for the BBC a few years ago, tries to make scientific sense from our attraction to nature. He proposes what he calls the Biophilia hypothesis, suggesting a deep genetic sequence in us may be hard to erase, despite our efforts to be technically independent from nature.

So, as a teacher in mindfulness, I say ‘get out there’, with your friends and families as well, whatever their abilities or interests. Just listen to my remarkable friend Katherine:

“…I find that the form of ‘therapy’ I have acquired from making wildlife a part of my daily routines (important for someone like me on the autism spectrum) has come in two broad categories, namely the calming ‘chill-out’ effect and also rising to the challenges that I’ve experienced deepening and expanding my wildlife knowledge, my confidence in passing on this knowledge to others and field craft. It has also thrown up a few surprises, especially in regard to another way I perceive the world; in addition to my Asperger’s Syndrome, I ‘taste’ the sounds of nature, as I have a rare ‘auditory-gustatory’ form of Synaesthesia, too.

Wildlife appreciation has come late to me. In childhood, I was more severely affected by my autism than I am now. I grew up in my own world, which sadly meant being totally oblivious to wildlife, regardless of how loudly it called or sung. At the beach, on holiday, I would totally ignore the gulls and other birds and just sit there picking up fistfuls of sand, draining the sand through my fingers, enjoying the tactile feedback it gave me. I’d be intensely focused on that alone, and without assistance from my parents, would have sat there indefinitely, oblivious to everything else around me.

Day-to-day life would consist of moving through the same ‘tunnels’ – my walks to school and back again, going to the shops on Saturdays, visiting school friends after school and at weekends. Again, no room for wildlife in the tunnels. It carried on like this during my time at primary school, the passing of my ‘Eleven plus’ exam and my time at grammar school & beyond for a good few years. Until 2001, when, aged 24, my ‘awakening’ began to happen.

I’ve not had much luck finding a job with my uneven profile of abilities, lack of life skills and behaviour. Indeed, the unemployment rate of people of working age with autism is as high as 85%. I was happy to secure a semi-regular gardening job to help an elderly man not far from my house keep his garden neat and tidy. This involved clearing weeds, neatening borders and other general tasks. Very frequently, a Blackbird would come fairly close to me, apparently ‘curious’ as to what I was doing. That was the first time I’d really looked at any animal or bird before. My eyes had opened very fleetingly, but not in any way that suggested wildlife enthusiasm would be any time soon.

Autistic people will remember such encounters with exactly the same level of emotional intensity every time they recall it to people. They will remember every detail, too. Our memories are very retentive, driven by our intense focus on the subject. If this special interest is recognised by an employer or provider of a voluntary service understanding & willing to take on & ameliorate the social/emotional/behavioural unevenness, then this can be the most remarkable, life-changing therapy for someone with autism or another learning difficulty. Lots of new worlds can be opened up to them, especially if, like me, you’re so used to people telling you the confines of your condition (as well as having a lack of self-insight) that even in adulthood you’ve no idea what you’re good at until someone comes along and tells you!

These people can be your best and most productive employees, despite their lack of self-insight & difficulties relating to other people meaning they don’t come across well in a face-to-face interview. I am sure the goldfinches and House Sparrows that visit the 14 feeders in my garden will tell you I am good at keeping them fed and watered!

Peter Davison’s Fifth Doctor once said in an episode of ‘Doctor Who’; “For some people, small, beautiful events are what life is all about!” It’s true. I gain a lot of relaxing moments looking at the birds feeding on my feeders. Little moments, little diversions often bring about the most peace. And the odd drama, when the local sparrowhawk dive-bombs out of nowhere! And it makes you feel happy, when your efforts to attract wildlife pay off.

A few years ago, Song Thrushes nested in our garden for the first time we can remember. Five chicks hatched and four successfully fledging (one unfortunately got ‘sparrowhawked’). And the wisdom of the Robin who nested in one of our strategically-located old teapots under the extra rain-shelter of a rhubarb leaf, who managed to get 2 young chicks to adulthood. My efforts have managed to attract 37 species of bird to the garden, including Blackcap, Goldcrest, Greater Spotted Woodpecker, Reed Bunting and Lesser Redpoll.

I learned a hard-but-welcome lesson just before my FULL awakening happened in 2006. The restorative ability of wildlife and nature to drag you out of the black void of depression. I have struggled with anxiety & depression since my first breakdown in 1999.

The visits to my local reserves (RSPB Freiston Shore, then RSPB Frampton Marsh once the reserve was radically reshaped and expanded) began in earnest and the Life List began to expand. I became a member of the RSPB, the BTO, the Lincolnshire Bird Club and the Wildfowl & Wetlands Trust in the years afterwards, the bird feeders went up in the garden and many new challenges unfolded. The endless frustrations of trying to sort out immense wader flocks, added frustrations of hearing “You should have been here 5 minutes ago….”, the lovely joys of the RSPB’s Big Garden Birdwatch at the end of January and meeting so many new faces on my birding travels.

Another way it’s boosted me is developing from the person who asks other people “Ooh, what bird is that?” to the one assisting others with their ID skills in hides if required. When I got my first field guide, all the plumages seemed daunting to learn. However, the near-photographic memory I have helped enormously.

I seem to have made a lot of progress recently with trickier Sandpiper identification, and recently helped another fledgling birder differentiate between a Dunlin and a Little Stint. I remember being alone in a bird hide and had to rely on my knowledge to correctly identify a Green Sandpiper from a Common Sandpiper. Then going elsewhere and trying to locate the sole Pectoral Sandpiper from an enormous flock of Dunlin, Ruff and others. With the retentive visual memory, I can almost summon up the bird in front of my eyes and focus on that image.

It’s a rollercoaster. From the plunging disappointment of ‘grips’ and ‘dips’ to the highs of FINALLY getting that ‘bogey bird’ off the list and the moments of awe when you witness a huge wader flock take off at once or standing in a field with a Starling murmuration in front of your eyes, it’s a fantastic hobby, and one I won’t go off.

Sometimes, you’ve got so much wildlife in your life there aren’t many areas of the brain left to fit any more stuff in! I really feel I’ve bloomed from a helpless minnow on her first birding trip to full adult plumage, confident enough to help other people broaden their knowledge and hopefully plant the first seeds of wonder in younger wildlife-watchers! I refuse to let my autism, or the fact that the song of a robin tastes of apple & elderflower juice define the parameters or ability level of my interest in birds. For too long there has been a culture of underestimation of just how able autistic people can be.”

So, all guys and all gals, we’ve got a mission. We’ve got to take people out with us. We’ve got to introduce this space, our space, to all. It’ll be good for us, good for them and good for nature!

Fergus Beeley is a British wildlife expert, bringing over 25 years of wildlife expertise – much of it learnt while producing landmark blue-chip wildlife films for BBC such as The Life Of Birds with Sir David Attenborough. Fergus has made many award winning bird films for BBC Natural World and National Geographic Explorer. In 2015 he won a BAFTA for an Edutainment wildlife app for kids called Virry. Fergus is now a pioneer in nature connection, mindfulness in nature and eco-therapy.