Opening hours: This part of the reserve is open 24 hours a day

Public Transport Links: Nearest mainline train stations at King’s Lynn or Sheringham. From King’s Lynn bus station (several hundred metres from the train station), and Sheringham train station the Coast Hopper bus service runs along the A149 coast road. Coast Hopper details can be found on HERE or search for Coasthopper in your internet search engine. Note that timetables vary according to the season, and that sometimes when travelling from King’s Lynn a change of bus is necessary at Hunstanton. The nearest bus stop is at “The Hero” pub/restaurant on the A149. It is about 125 metres from the A149 to the car park along East Harbour Way. Note that this is a one-way road with traffic permitted in a northerly direction (towards the harbour) only.

Parking: There is an extensive car park on the ‘hard’ (harbourside) – but be aware that this floods completely at high spring tides, and partially at many other high tides. At very high tides  the water even comes right onto the road just outside the car park entrance. Do not park here and leave your car unless you have noted the tide times!! On a recent twitch in mid September 2017 over a dozen birders were so keen to see an elusive migrant (a Pallas’s Grasshopper Warbler) that they failed to consult their tide tables, and came back to find their cars in quite deep water. 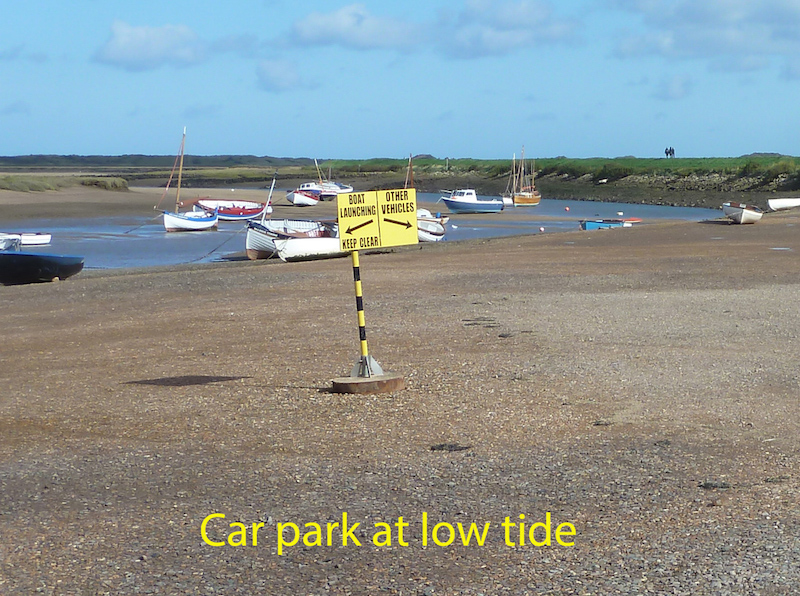 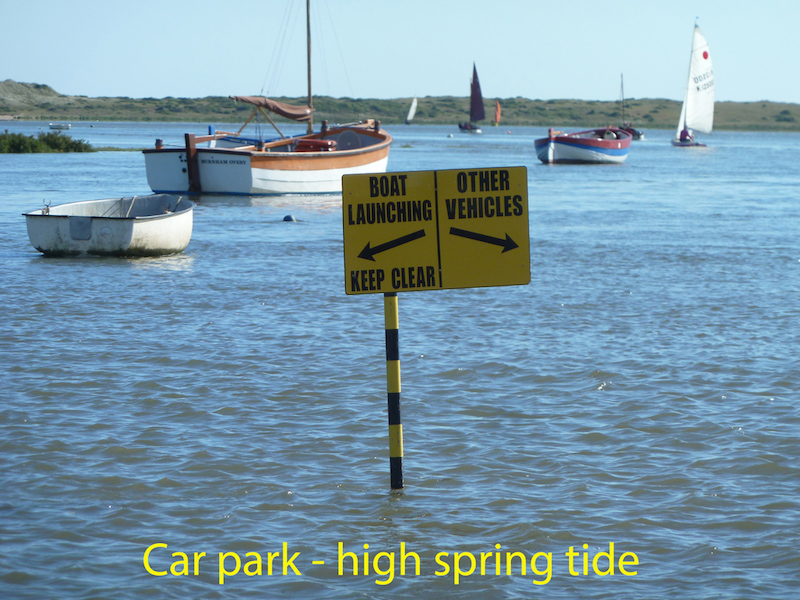 There are no charges for parking, and no designated blue badge spaces. There is no dedicated space for minibuses, but there is room if the car park is not full.

Due to the regular flooding there are often puddles on this car park, but they can usually be avoided. The surface of the car park is very firmly consolidated stone, but watch out for soft mud near the edge of the channel. It would be easy to drop off passengers in this car park if desired. Note that during the holiday season and at weekends with fine weather at any time of the year this car park does get very busy.

There is also very limited road-side parking on the loop road that comes down from the A149. However solo wheelchair users should note that as this is a one-way road, and has most parking availability on the right and no pavement, many otherwise suitable parking places may not allow them to open the driver door enough to manoeuvre their chair in and out of the car. There is some roadside parking on the A149 itself, which is a two-way road, and thus gives more flexibility.

Toilets: There are no toilets on this part of the reserve. The nearest accessible public toilets with RADAR locks are located on Beach Road, in Wells, opposite the Harbour Office. There are also accessible toilets in the Beach Road car park – managed by Holkham Estate. Toilets will be provided in the new Orientation Centre on Lady Anne’s Drive (see Central Section report), when it opens in 2018.

Public telephone: None on the NNR. There is a phone box on West Harbour Way, near the junction with the A149. It is coin operated and was working on the day of survey. However it is an old-style red telephone box, and certainly not wheelchair friendly. Mobile phone signals along this coast are often low strength or non-existent, and should not be relied on.

Visitor centre: None on the reserve, but see notes on the Orientation Centre that is due to open in 2018. These can be found in the report on the Central area (Lady Anne’s Drive and Wells Beach.

Although most of the area north of the car park in this sketch map is part of the NNR, access is largely via the footpath along the sea wall. This is an ‘out and back’ route, with a distance of about 2kms to the beginning of the dunes. 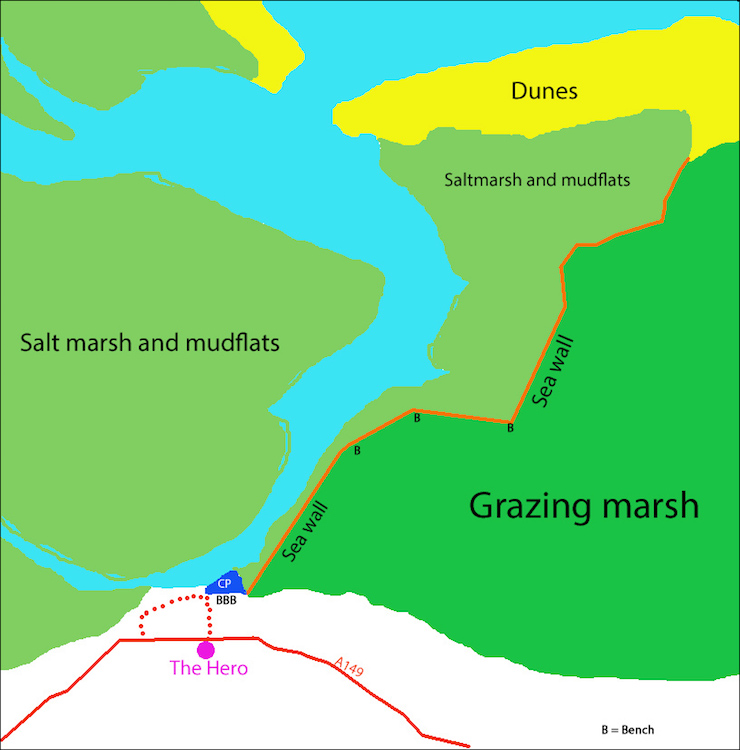 If there are some in your party who can manage a longer walk they could consider walking round the dunes to the west. A fairly level path (not wheelchair-friendly) exists along the edge of the salt marsh – with some avoidable muddy stretches after a high tide. The vegetated dunes attract a wide range of birds at different times of the year, frequently including rarities. While it is possible to return along the seaward edge of the dunes please avoid this area during the nesting season. Little terns, ringed plovers and oystercatchers nest on the beach and are easily disturbed.  Please also be aware that the sea goes out a long way at low water spring tides, but comes in very quickly, filling channels in the sand, with the serious potential to cut off your retreat.

An alternative walk at the end of the sea wall is to continue on along a board walk through the dunes, then turn right, following the finger-posted sign for the Coast Path. It is about 3kms to Holkham Gap, where you can gain access to Lady Anne’s Drive. This section of the Coast path is not wheelchair accessible. Please be aware that some of this path floods at high spring tides!

At high tide the sea wall can be accessed via the path in front of the houses. Owing to the narrowness of the stoned path wheelchairs would probably have to take to the grass in front of the benches. 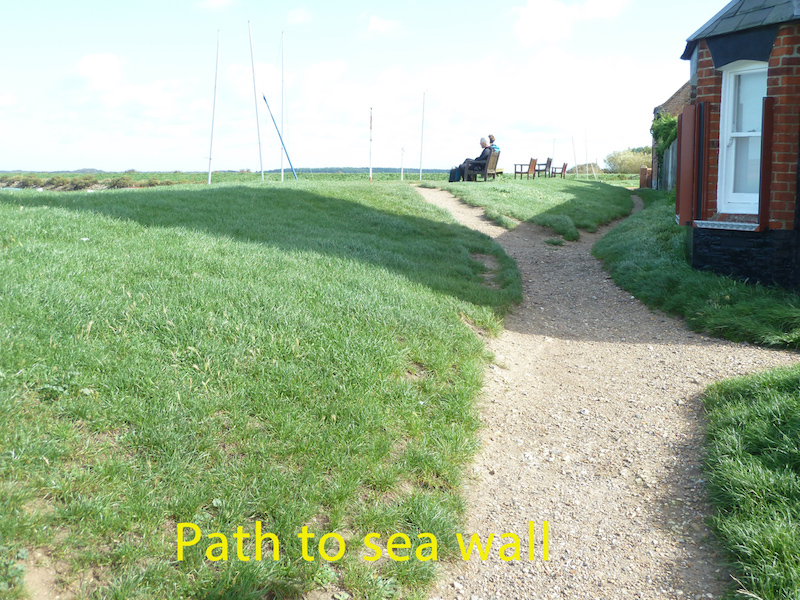 At low tide there is access up a ramp just beyond the benches, though this is fairly steep. Neither option is ideal. 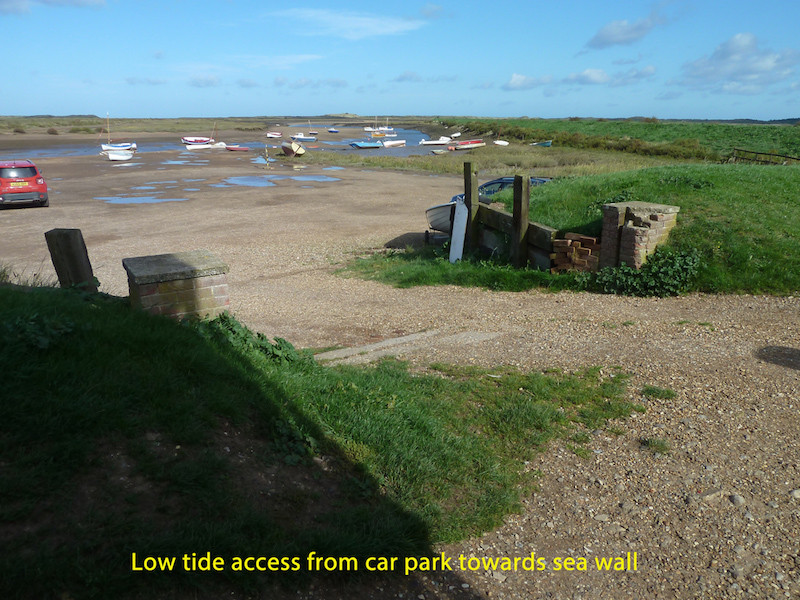 Once past the benches the start of the sea wall is just through a gate. It is about 82cms wide, and swings in both directions, with no latch. 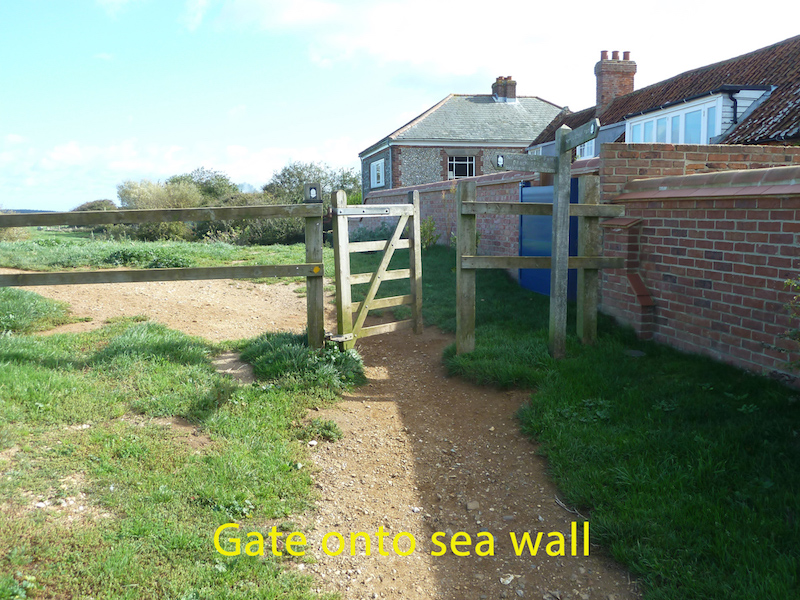 For those who can manage it there is a direct, but sloping, path up to the sea wall from the car park, through a gate (85cms wide with a latch at 110 cms high, and opening towards the car park), or alternatively a set of 10 steps, 82cms wide, with handrails at 100cms. 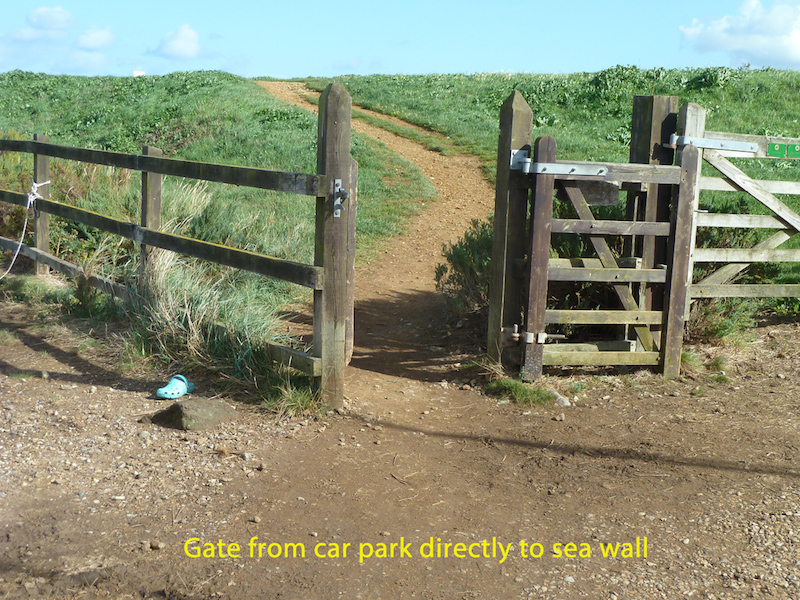 The path along the sea wall is level, firm and mostly well-drained, with just a few puddles after rain. However, long stretches are very bumpy, due to the washing out of fine material, leaving stones exposed. How far wheelchair users would want to travel along this path would depend on their tolerance of a bumpy ride! 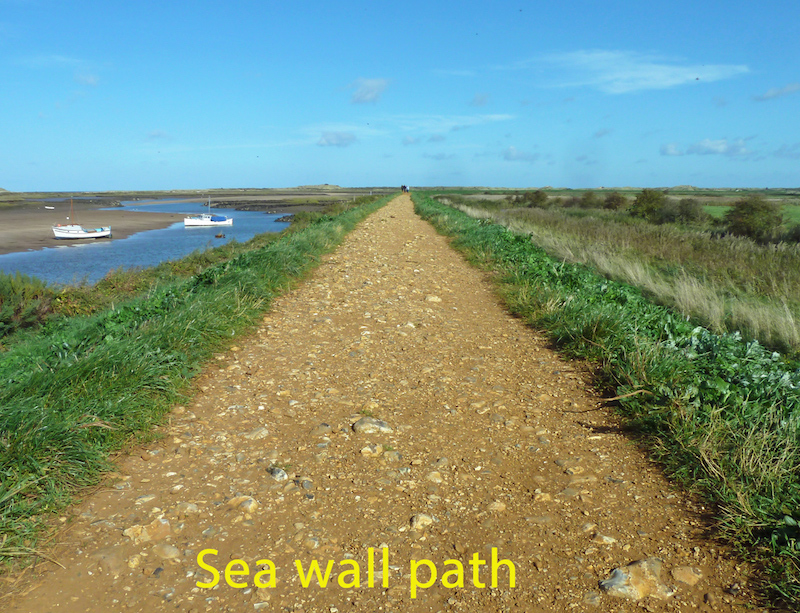 The path is generally at least 1200mm wide, with room for wheelchairs to pass in most places. Overhanging and encroaching vegetation is not a problem anywhere. 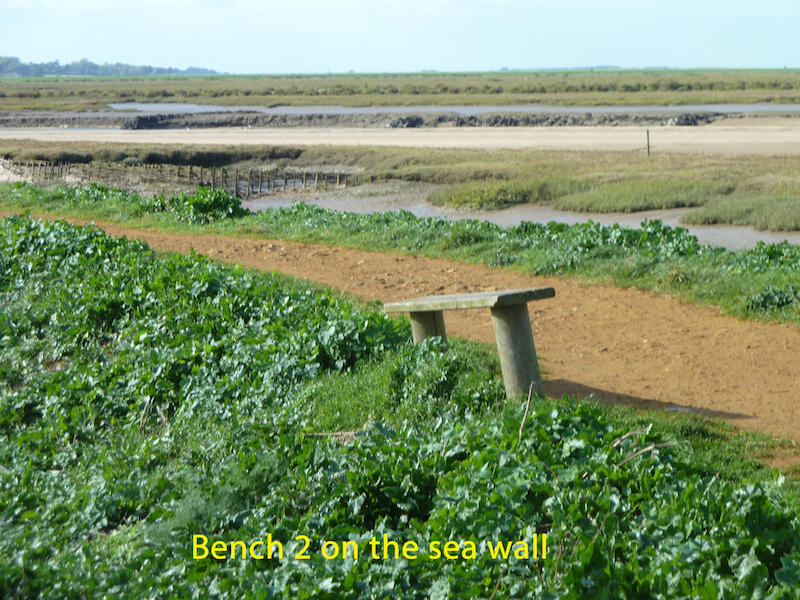 Each of the benches gives superb views over the tidal channel, mudflats and saltmarshes on one side, and over the grazing marshes on the other.

At low tide there are usually good views of common waders such as curlew, redshank, and ringed plover on the mudflats. On the grazing marshes there are frequently flocks of geese – Brent, Pink-footed as well as Greylag, plus waders feeding in the grass.

In June 2017 this sedge warbler was singing away right next to the path on the sea wall. 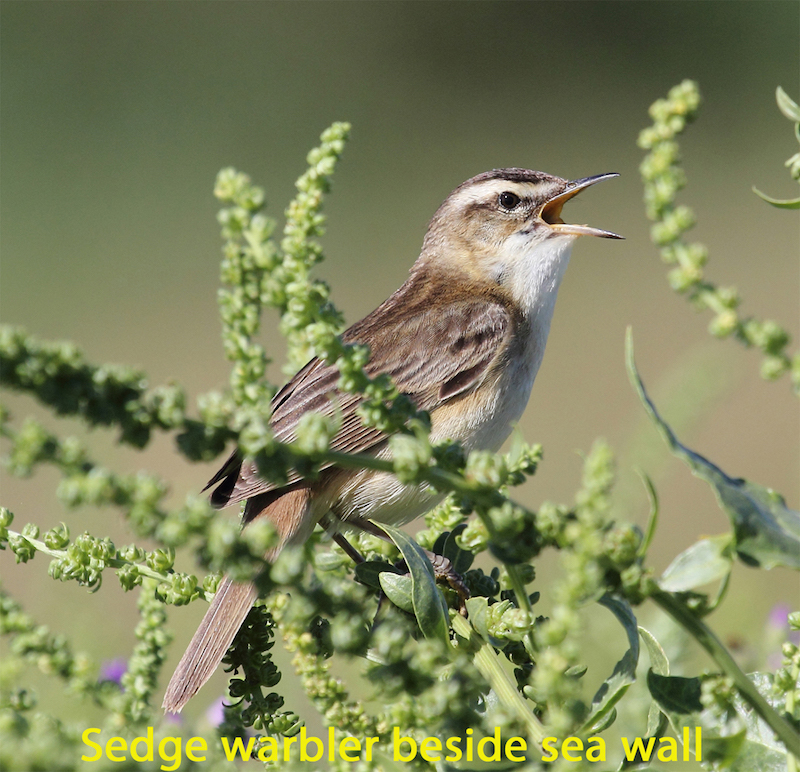 Besides the more common passerines, waders and wildfowl, the area viewable from the sea wall has been known to attract a wide range of rarities during the migration periods.

There are no hides on this section of the NNR 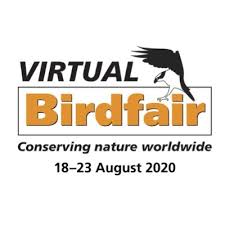