Warning: This is a coastal reserve. At High Spring Tides the sea can cover the saltmarsh. This happens very rapidly. You are strongly advised not to venture out onto the marsh, but enjoy the views from the footpath. For any visit always check the predicted tide times. A link to tidal predictions for Wells is available on the Holkam NNR website (see the ‘Nature Reserve and Beach’ tab). 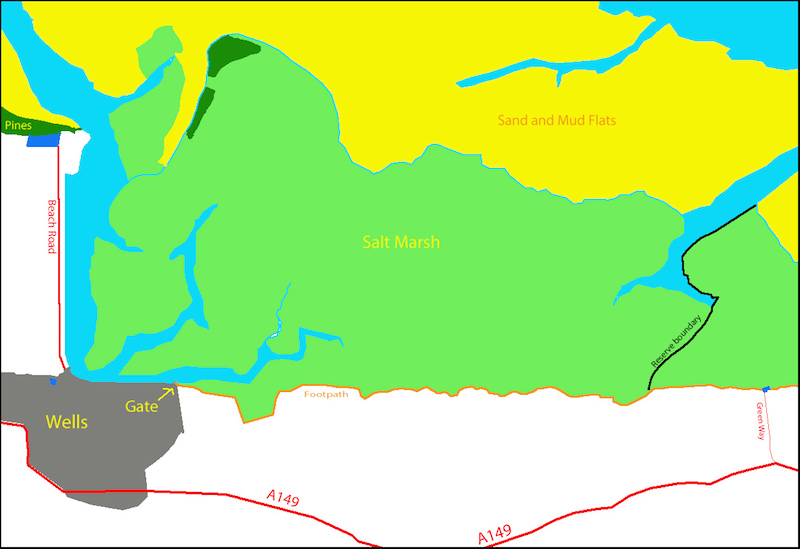 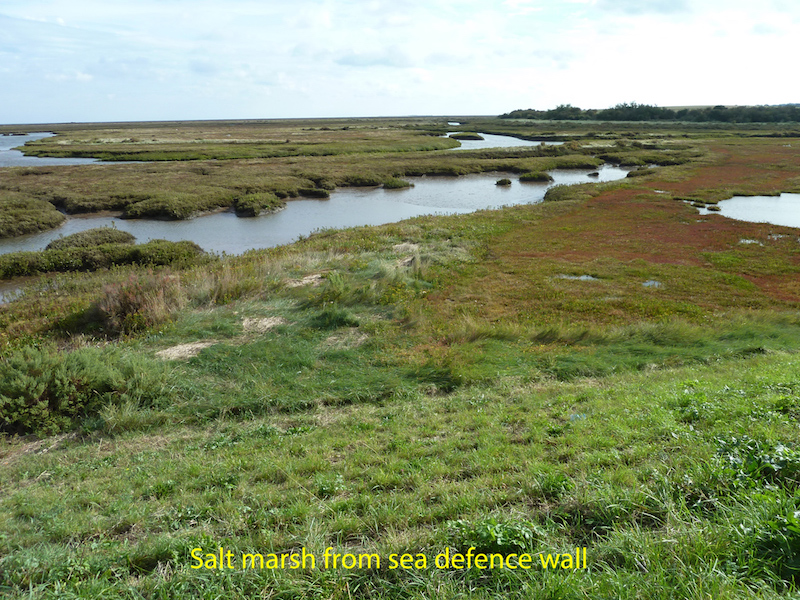 This eastern section of the Holkham NNR can be reached by taking the path as it heads east from Wells. Follow the signs to East Quay. 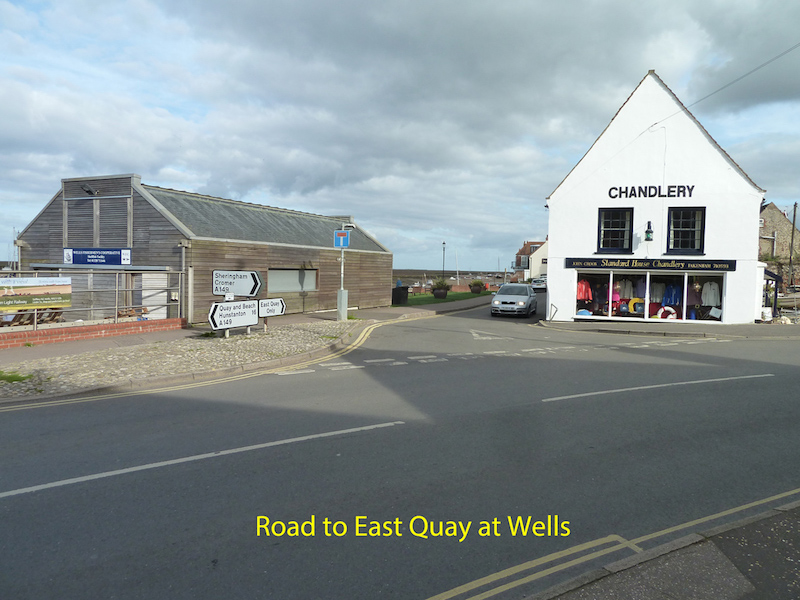 Where the road forks to the right follow the rough track straight on, past the fishermen’s sheds. 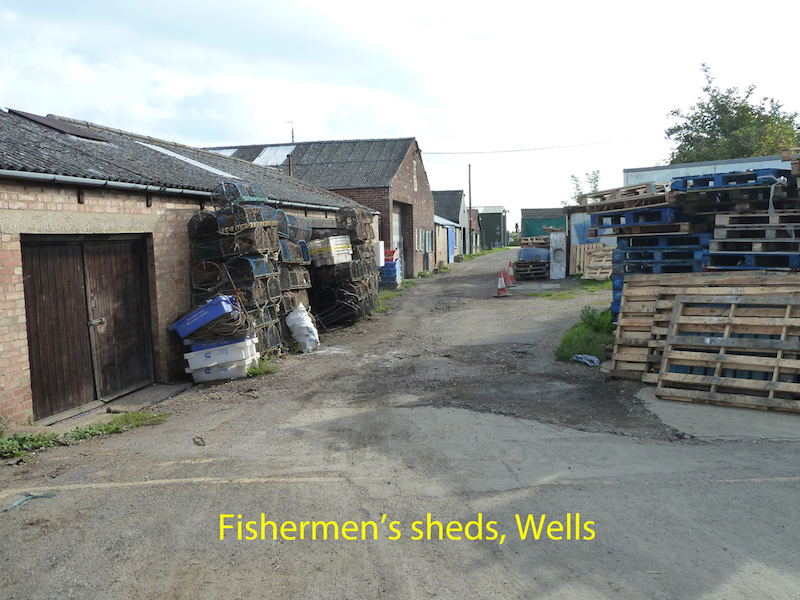 After about 100 metres there is a slipway into the river. Immediately after this there is a gate leading up onto the sea defence wall. Go through this gate and up onto the top of the wall.

A range of waders can often be seen in the creeks and pools across the marsh. The hedgerows can hold numerous passerines, and are especially favoured sites during spring and autumn migrations. In winter (especially December to February) there is often a raptor roost, with hen harrier and sometimes short-eared owl present. This is usually in the trees and bushes at the eastern end of the Holkam NNR. It may be more easily accessed (on foot only) from the (free) National Trust car park at the end of Green Way, Stiffkey. (Grid reference TF 964439) For those unable to manage this walk it is worth viewing the marsh from that car park – even from within your car –  on the chance of seeing raptors crossing the marsh on their way to roost just before dusk.

Opening Hours: This part of the reserve is open 24 hours a day.

Public Transport links: Nearest mainline train stations at King’s Lynn or Sheringham. From King’s Lynn bus station (several hundred metres from the train station), and Sheringham train station the Coast Hopper bus service runs through Wells. Coast Hopper details can be found HERE or search for Coasthopper in your internet search engine. Note that timetables vary according to the season, and that sometimes when travelling from King’s Lynn a change of bus is necessary at Hunstanton. The nearest convenient bus stop is near the junction of Freeman Street and Beach Road, just west of the harbour.

Note that most roads in Wells have at least single yellow lines, as this is a busy holiday destination. Many of these prohibit parking between 8am and 8pm from Good Friday till the end of September, but for the rest of the year parking is allowed. This includes along most of East Quay. (But do check local street signs, as regulations can change.)

Parking charges in October 2017 were as follows:

Blue Badge holders are not exempt from parking charges, but have an extra 30 minutes beyond ticket expiry time.

All ticket machines were at an accessible height, and the car parks had a tarmac or concrete surface.

Cars could be driven to the Coast Path access gate, where there is room to drop off passengers.

There would be room to park a minibus along East Quay (when parking is allowed there).

Toilets: At the time of survey nearby public toilets in Wells are available on Beach Road (opposite the Harbour Office, a short way along Beach Road from the Quay), and in Stearman’s Yard car park. Only the toilets on Beach Road have accessible toilets, operated under the RADAR key scheme.

There is also an accessible toilet at the entrance to the Beach Road car park at the northern end of Beach Road, operated by Holkham Estate. This car park gives access to the section of the NNR that lies immediately west of Wells.

Public telephone: There are no public telephones on the NNR, but there is an emergency telephone on the board walk at Holkham Gap (see details on the Central Area report), but that is on the other side of Wells. Mobile phone signals along this coast are often low strength or non-existent, and should not be relied on.

Wardens: There are wardens on duty during most working hours, but this is a very large reserve and they may be working on other parts of it. See contact details.

Visitor Centre: There is currently no Visitor Centre anywhere on the Reserve, but work started in September 2017 on building a new Orientation Centre at the northern end of Lady Anne’s Drive, on the central part of the reserve. This is due to open in June 2018, and will have toilets and refreshment facilities, views over the grazing marsh, and will be staffed by wardens. Details can be found on the Holkham website, on the Property-Planning and Development tab.

The Coastal Footpath (marked on the sketch map) is the only access to this part of the reserve. It is about 1.6kms from the entrance gate to the eastern boundary of the NNR, but a further 800 metres to the National Trust car park at the end of Green Way, Stiffkey, the next point easily accessible by car. (TF 964439).

The first section of the path, along the top of the sea defence wall, is mostly surfaced with rolled stone/aggregate, and is firm and well-drained, if a little bumpy in places where sand has washed away from between the stones. 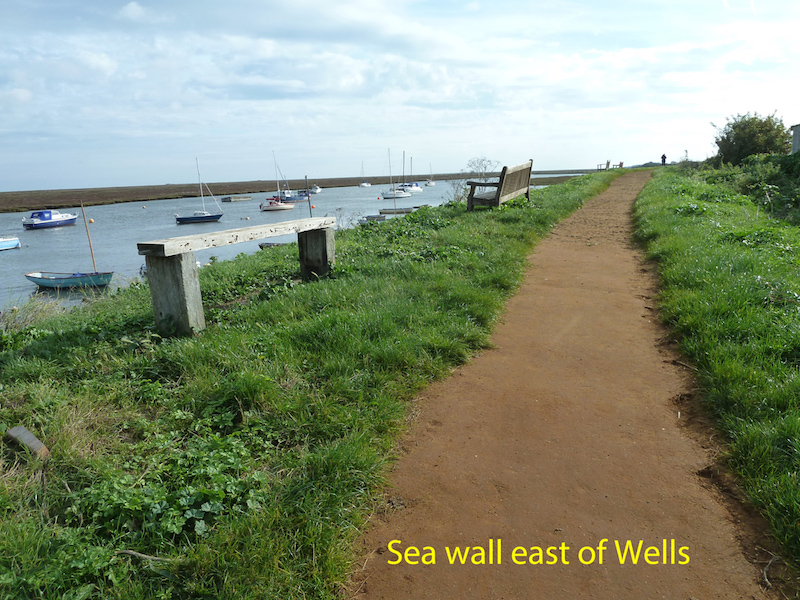 After about 500 metres (where the sea wall takes a sharp right turn) the path surface is less well drained, and holds muddy puddles after wet weather. 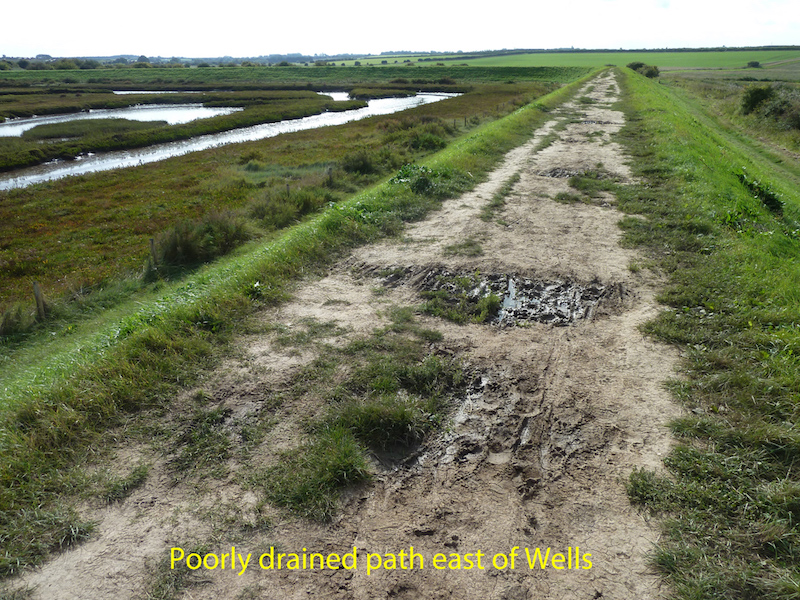 At the end of the sea wall (about 900 metres from the entrance gate) the path descends steeply to the level of the salt marsh, and becomes a path that is much narrower and just a footpath on soil, with no special surface.

Warning: Wildfowling does take place on the saltmarsh – another reason to stay on the footpath!

The only barrier across the path is the entrance gate near the slipway, at the western end of this section of the NNR. Unfortunately this gate is situated near the bottom of a noticeable slope, and has a latching mechanism that levers across the top of the gate. The gate is 175 cms wide, and the height of the latch is 110cms. Solo wheelchair users may be able to open this latch, but could find it difficult to close the gate from either side, having gone through the opening, due to the slope through the gateway. 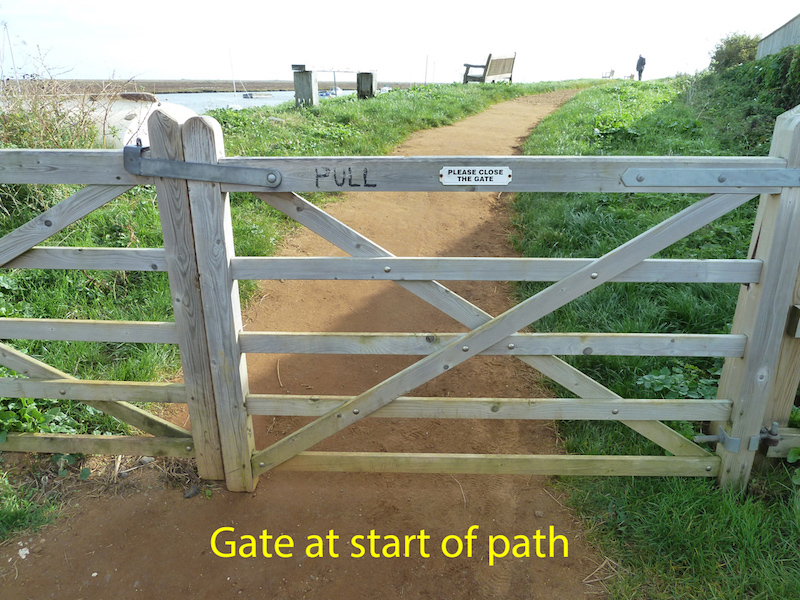 Resting places: There are three bench seats with armrests and backrests and seats about 45cms high. There is also a bench (no armrests or backrests) with a higher seat – about 65cms high. All are just near the beginning of the sea defence wall, and give excellent views across the channel to the salt marsh. 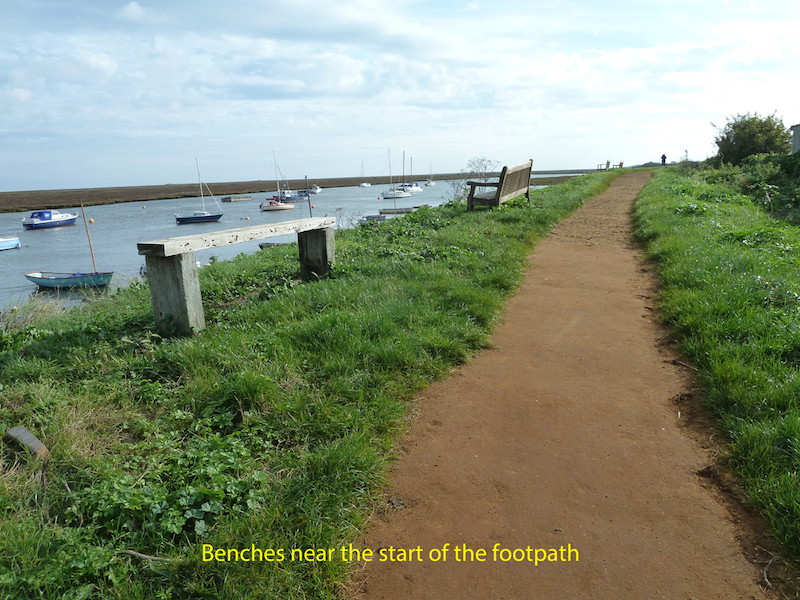 There are no more seats on the sea defence wall, but just before it turns right there is some fencing (overlooking a sluice), which might provide some lean-on support (at 130cms high), or indeed it could be possible for some to sit at the top of the steps.

Beyond the sea wall there is one bench seat at a point where the path momentarily turns south, at TF936438 (just west of the words “Warham Greens” on the OS 1:25000 map). This is about 800 metres beyond the end of the sea wall. 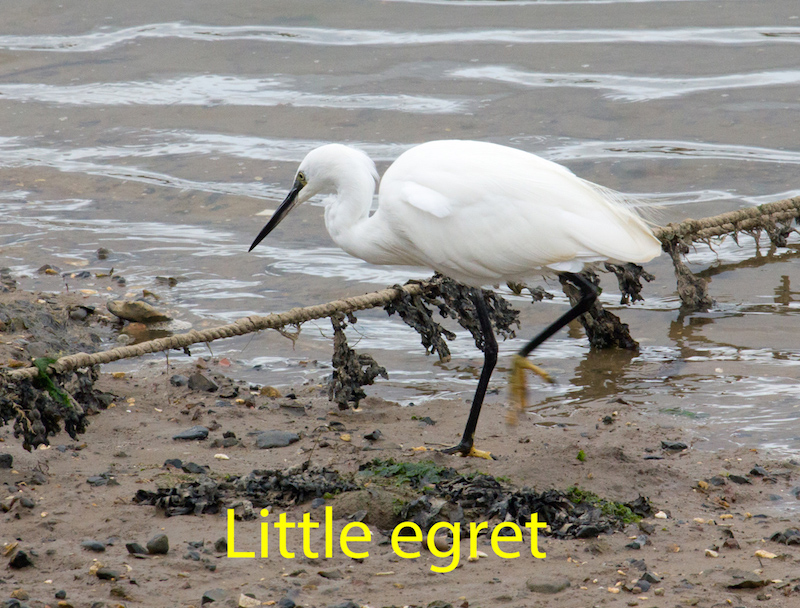 There are no hides on this section of the NNR