Guide dogs, on leads are permitted.

The nearest accessible toilets with RADAR locks are at the northern end of Beach Road, Holme (as per main reserve). As with the rest of the NNR there is no public phone and mobile signals are weak. Guide dogs on leads are permitted.

The reserve was visited and assessed over a number of days during March 2017 by Peter Bangs.

The Holme Dunes NNR includes the whole of Ragged Marsh salt marsh, and extends south to include all of Thornham Harbour where it lies beside Staithe Lane. It can be accessed via the Coast Path near the visitor centre (but not easily, if at all, in a wheelchair), or from Thornham village by car. Thornham Harbour is an excellent birding venue, with waders and wildfowl on the seaward side, birds such as wheatears, twite and linnets mainly on the landward side, and marsh harriers almost ever-present over the grazing marshes. Increasingly red kite are present overhead, too.

Besides the birding, the spectacle of the harbour and saltmarsh being completely covered by the sea at high spring tides is an attraction in itself. 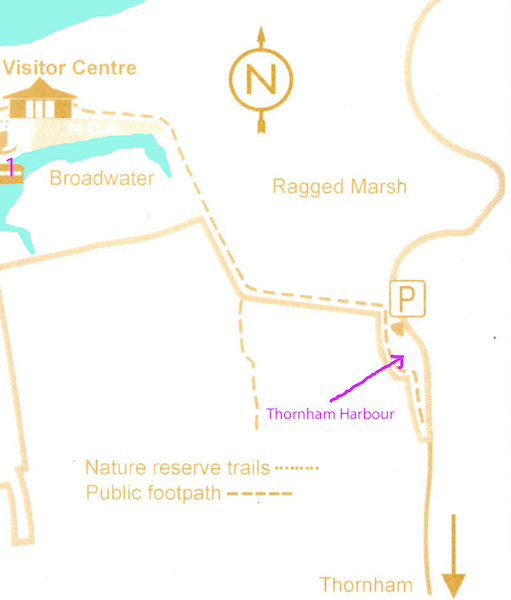 It is at the far northern end of Staithe Lane in Thornham.

As for main Holme Dunes reserve, but alight at Thornham Deli (good take-away and eat-in food) and head the short distance west to the junction with Staithe Lane (signposted to the Lifeboat Inn). There is a pavement as far as this junction, but not along Staithe Lane, though that road is straight. Follow Staithe Lane north until you reach Thornham Harbour – a creek with moorings for small boats and an historic coal barn. The distance from the bus stop is about a kilometre, and there is a bench seat with backrest after about 250 metres, by the junction with Ship Lane.

The bus route is the Coasthopper, run by Stagecoach

Buses run from Kings Lynn (change may be needed at Hunstanton) or Wells.

There are two places where cars can be parked. At the very end of Staithe Lane is a dedicated car park to the left of the lane. It is also possible to park cars on the slope leading up to the sea bank on the left, as you arrive at Thornham Harbour (But please do not obstruct access to the gateways.) 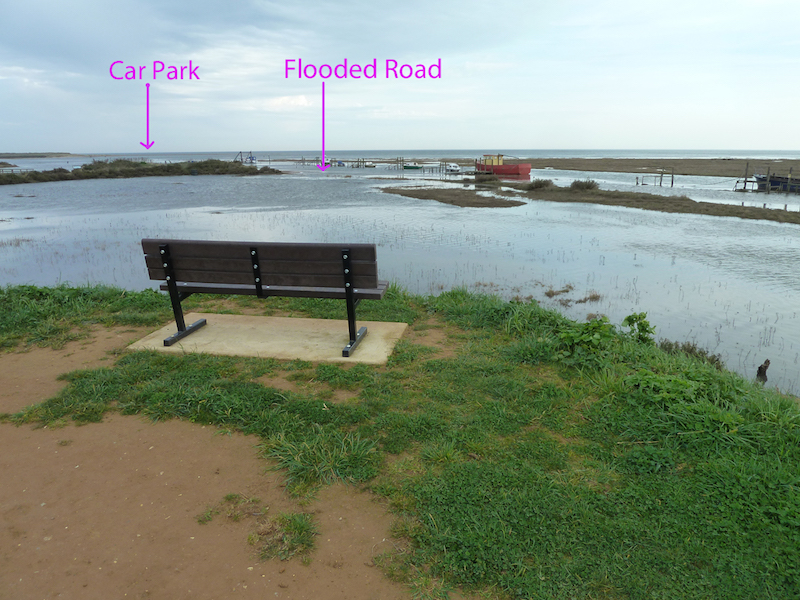 Please note – the northern end of Staithe Lane floods at high spring tides. The car park at the very end of Staithe Lane is slightly raised and is above usual flood levels, but it does get cut off for about half an hour each side of high tide. The slope up to the sea bank is also cut off at high spring tides – but not for quite so long. (Note the high tide mark in the photo.)

There is no dedicated space for minibuses, but there is room if the car park is not full. 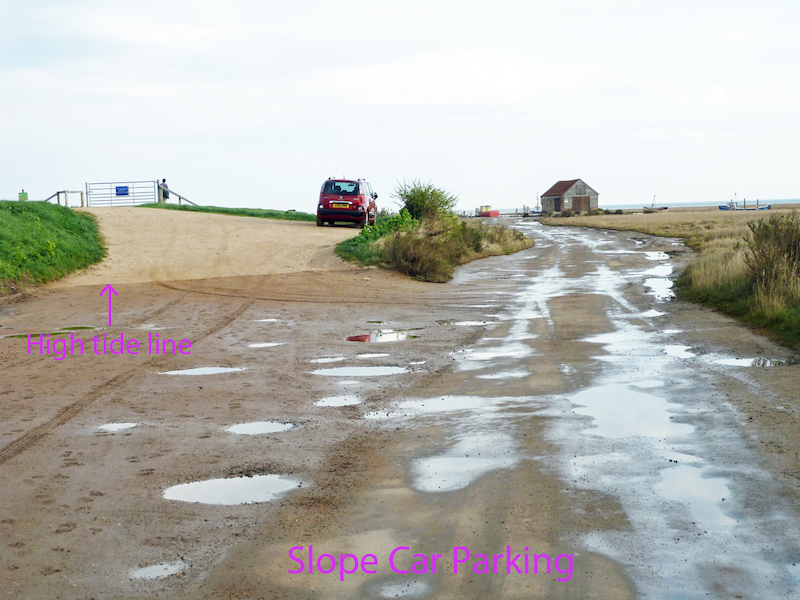 You are strongly advised to check tide times before parking in this area!

At low tide is is possible to park beside Staithe Lane at Thornham Harbour, though much of this can be wet at Spring tides. It is possible to look across some of the saltmarsh from a car without the need to get out. 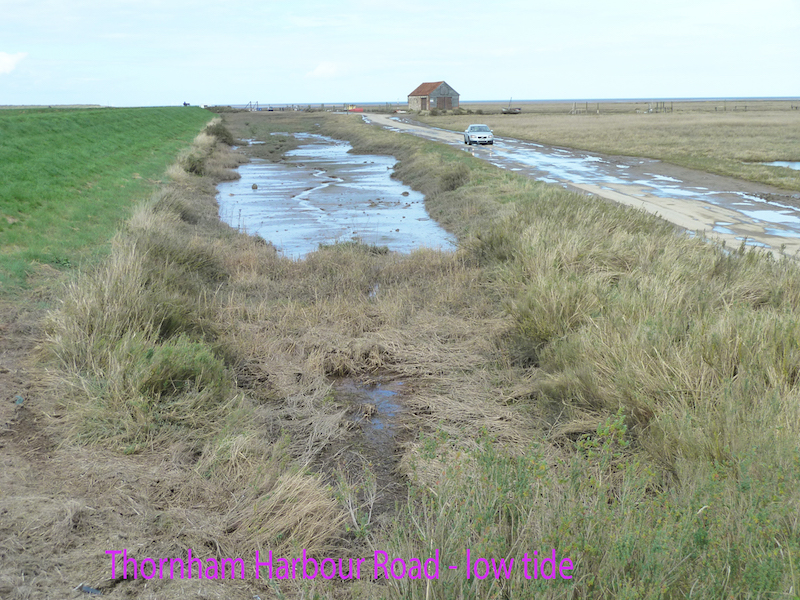 Passengers can be dropped off in most places in the Thornham Harbour area – subject to the state of the tide! 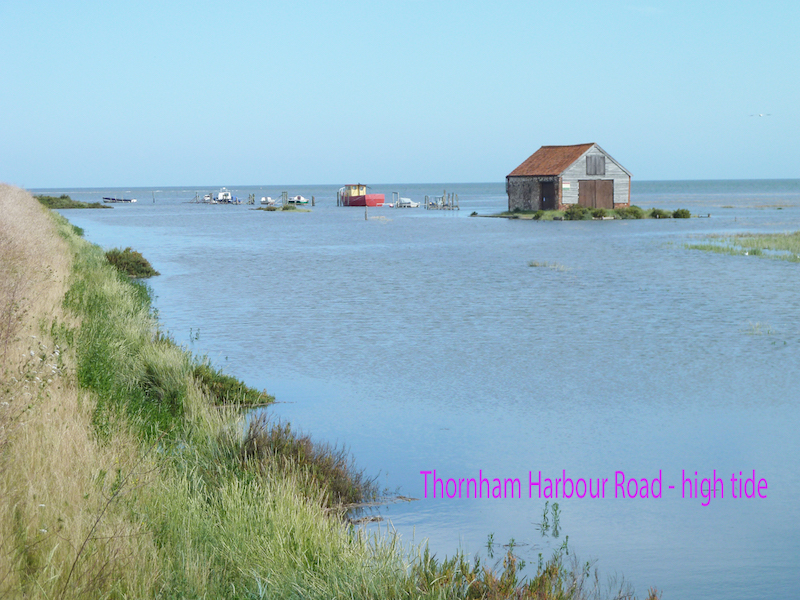 The car park surface is mostly firm, but not well drained. There is often a large puddle in the centre.

The slope up to the sea bank is firm, and well-drained due to the slope. The gradient at the top of the slope does level out somewhat.

At low tide it is possible to drive the length of Thornham Harbour. There are views over salt marsh from the road, even in a car. It is possible to park beside the road, taking care to avoid the wettest spots. At the end of the road there is a car park to the left. Although elevated, views towards the sea from the car park are restricted. However there is a bench seat with backrest, almost hidden from view, just beyond the seaward end of the car park. 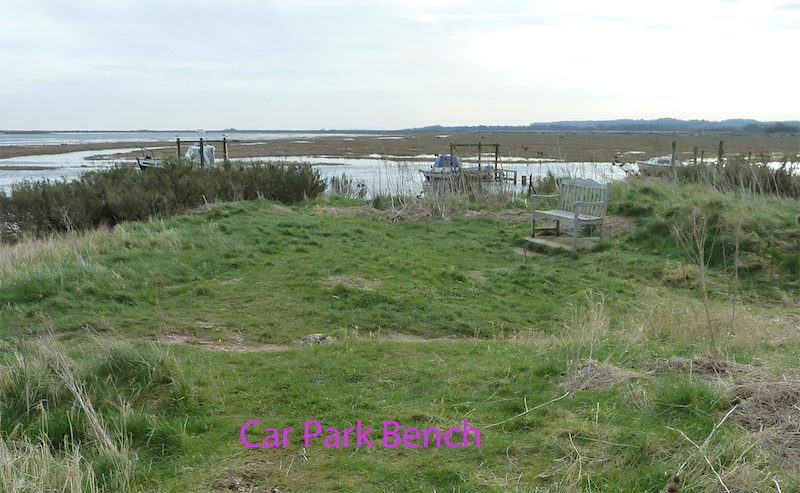 At various states of the tide good birding can be had in all directions from the car park area.

It is also well worth the effort to access the sea wall. There is a path leading from the car park, but this is uneven and steep in places. From the car park to the sea wall is about 100 metres. For wheelchair users it would be easier to access the sea wall from the sloped car parking spot. There are three bench seats with back rests located along the first part of the sea wall, and two more much further on, beside a length of board walk. All of the first three – and the lengths of sea wall between them –  provide good birding over the salt marsh and channels, and the grazing marsh inland. Birds seem to be very tolerant of your presence – even though you are on the skyline. This means that surprisingly close views of waders, in particular, can often be had. 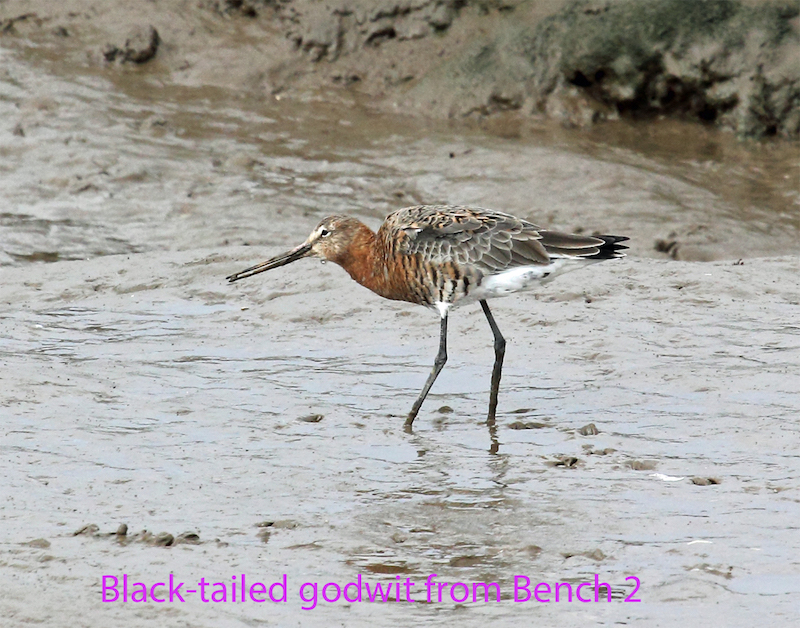 Eventually the sea wall meets the sand dunes. From this point the path changes to a board walk which is much narrower and in places steeply undulating. The two benches here (the second one backless) look down over the Broadwater and the NOA reserve. The following are approximate distances along the sea wall, starting from the first gate at the top of the sloped parking spot at the entrance to Thornham Harbour.

Thornham Harbour can also be accessed from the main Holme Dunes reserve. The NOA gate is at the eastern end of the pines, so distances can be counted backwards from there. Until recently the coast path used a short flight of steps near the NOA gate to access the dune ridge board walk. In May 2017 these steps were bypassed with a heavily engineered section of board walk, with a gradient of 1 in 12. It is a little over 50 metres in length, and some wheelchair users may find the combination of distance over this gradient a problem. 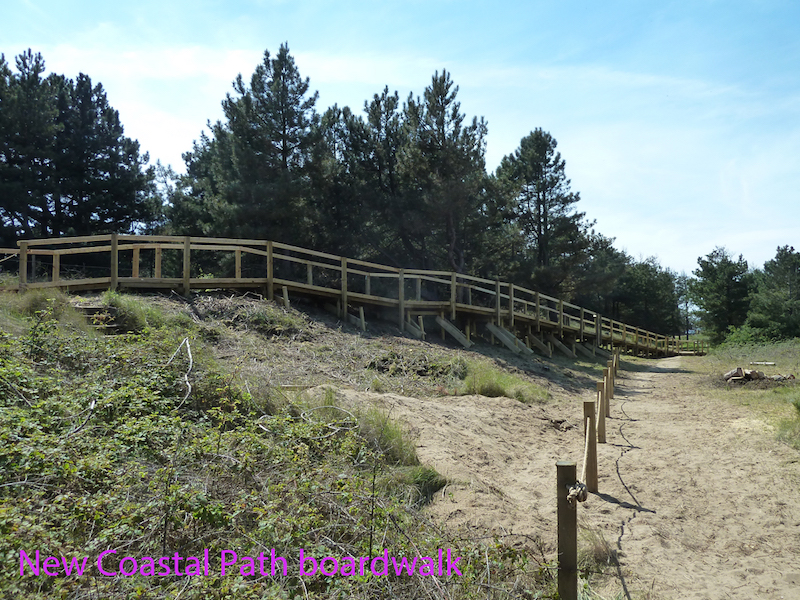 The surface along the top of the sea wall is rolled hardcore, which is reasonably smooth in most places. In wet weather there may be some muddy puddles, but they can usually be circumnavigated. The board walk along the dunes is nominally 120cms wide, but overgrowing vegetation and  blown sand mostly reduce this to about 80cms, although all of the path on the sea wall is at least 120cms wide. As can be seen the board walk along the dunes is undulating, with some steep slopes in places. Most wheelchairs users would need assistance. 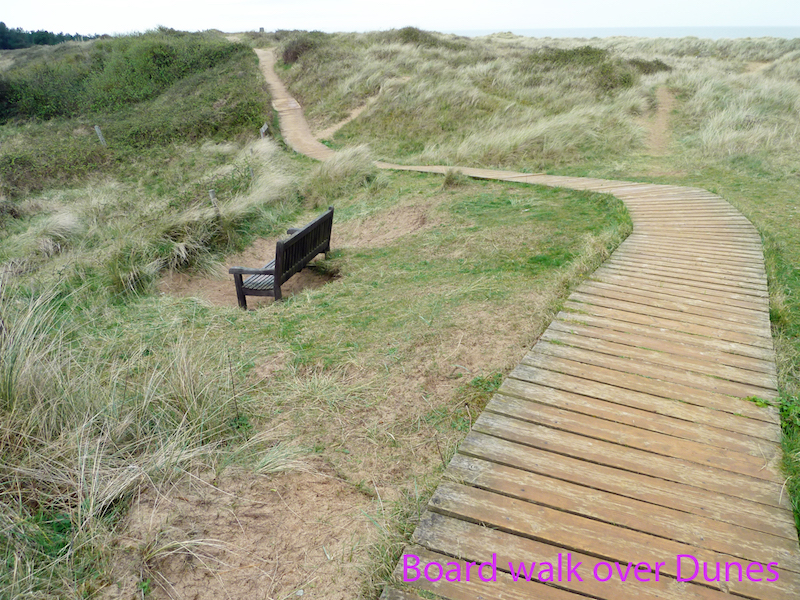 All of the path along the sea wall is flat and  level, but much of the board walk over the dunes has noticeable cross slopes – both to left and to the right, as the path follows the slope of the dunes. There are also some vertical drops of c50cms to the side, with no edges to the boards.

There are three gates across the sea wall path. Each has a bypass to the side. Gate 1 has the narrowest opening – at one point being 76cms (by the horizontal rail), and 86cms below that. Gates 2 and 3 have gaps measuring 90cms and 120 cms respectively. None of the paths are overhung by vegetation. 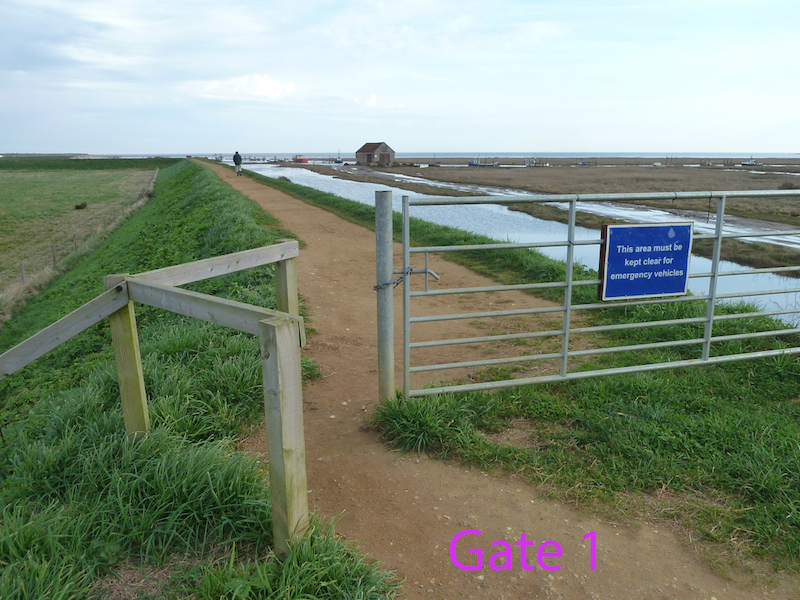 The path along the sea wall can easily accommodate two wheelchairs passing, along its whole length. The board walk has one or two places where a wheelchair could pull off to let another pass. Probably only usable with assistance.