Address: Beside the A149 coast road, situated between Cley and Salthouse villages – information from:

Walsey Hills is a hillside reserve of 3 acres (1.2 ha) beside the A149 coast road, situated between Cley and Salthouse villages. Being located close to Cley’s East Bank, the site offers superb views across the coastal marshes and across Snipes Marsh to the woodland of the North Foreland. The public footpath to the east of the reserve affords excellent views over the new Pope’s Marsh section of the Cley Marshes NWT reserve. The thorn and gorse scrub provides shelter for migrating birds, often attracting scarcer species. Besides birds, the hills are also frequented by Adders, Slow Worms, Common Lizards and a variety of insects.

Walsey Hills was once used by the former Cley Bird Observatory and was an important ornithological site even prior to 1950. The site was used for bird ringing and monitoring, and a Heligoland trap was built here in 1951. Despite being damaged in the North Sea surge of 1953, the trap was repaired and continued to be used for bird ringing and monitoring until the end of 1963.

The site is also of wider historical significance because of its Royal Observer Corps underground monitoring post (the ROC Cley-next-the-Sea “bunker”). Buildings like this were designed as fallout shelters in the 1950s, for use as monitoring posts in the event of a nuclear war. They were buried underground and equipped with scientific and communications equipment, as well as bunk beds, chairs, basic lighting and a chemical toilet, to allow personnel to monitor external conditions from the inside over a prolonged period. Built in 1958, the monitoring post was closed in 1968. The site’s ornithological role then resumed and the Norfolk Ornithologists’ Association (NOA) undertook bird ringing at the site from 1970. The NOA then purchased the site from Norfolk County Council in 1973.

An important migration watch-point, the site has attracted some unusual species in recent years including Red-backed Shrike, Alpine Swift, Honey Buzzard, Richard’s Pipit, Little Bunting, and Booted, Yellow-browed and Pallas’s Warblers, as well as regular Cetti’s Warbler, Pied Flycatcher, Common Redstart, and Firecrest. The adjacent marshes provide habitat for a wide range of wildfowl and waders. In fields to the south, farmland birds such as Yellowhammer may be found.

The reserve was visited and assessed over a number of days during March 2017 by Peter Bangs. 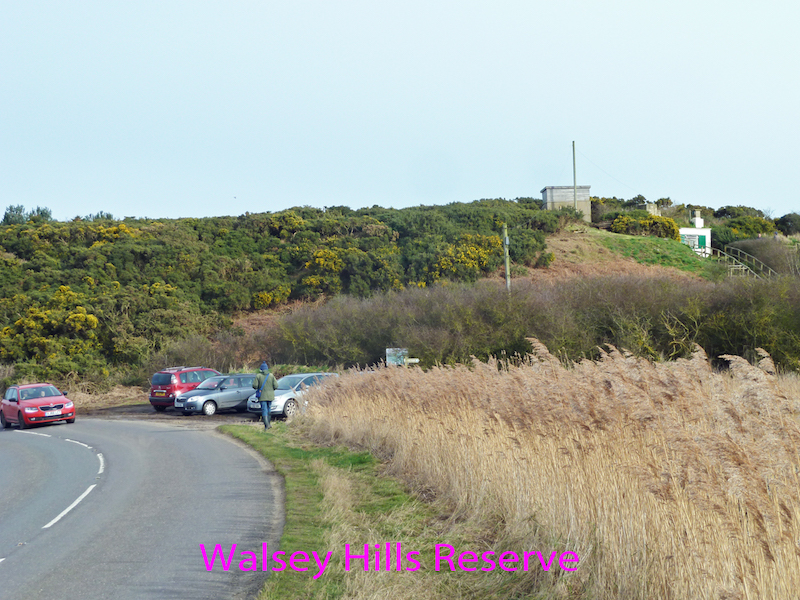 Walsey Hills is a hillside reserve beside the A149 coast road, as you can see in the photos.

It should be noted that due to the hillside location the terrain makes it impossible to arrange wheelchair access to this site. This survey/report has been carried out specifically to assist those who may have mobility issues, but who do not need the use of a wheelchair. 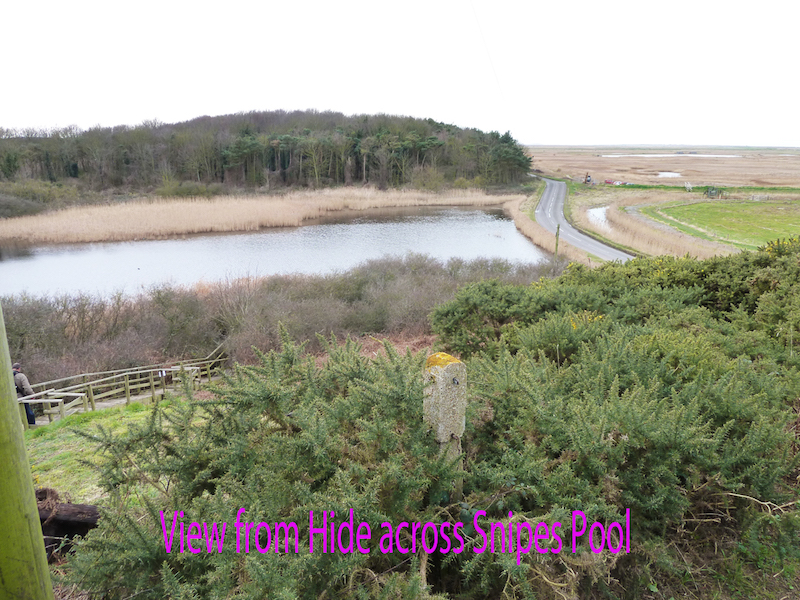 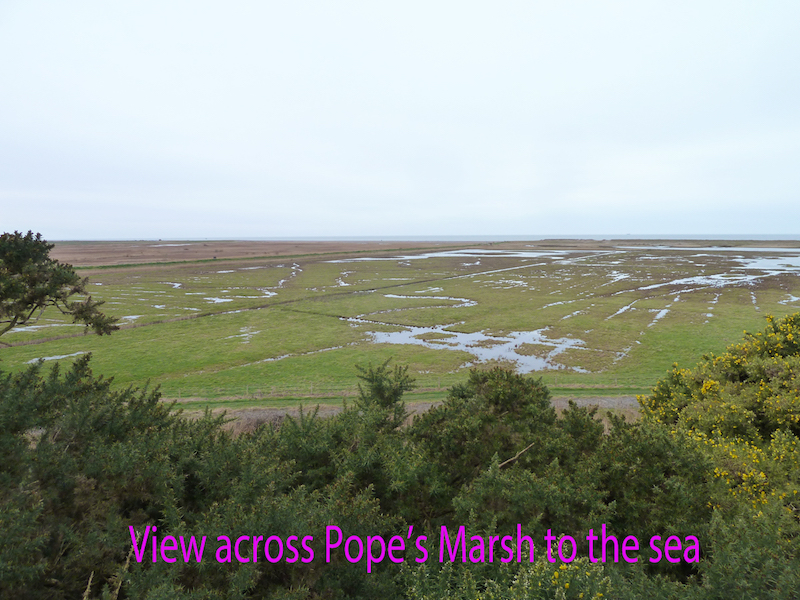 The Coasthopper bus route between Wells and Cromer runs along the A149, at the foot of the reserve. Alight at the NOA Watchpoint sign, near the Norfolk Wildlife Trust’s Cley Marsh Reserve East Bank. Note the road here has a bend and the bus may not be able to stop exactly by the sign. 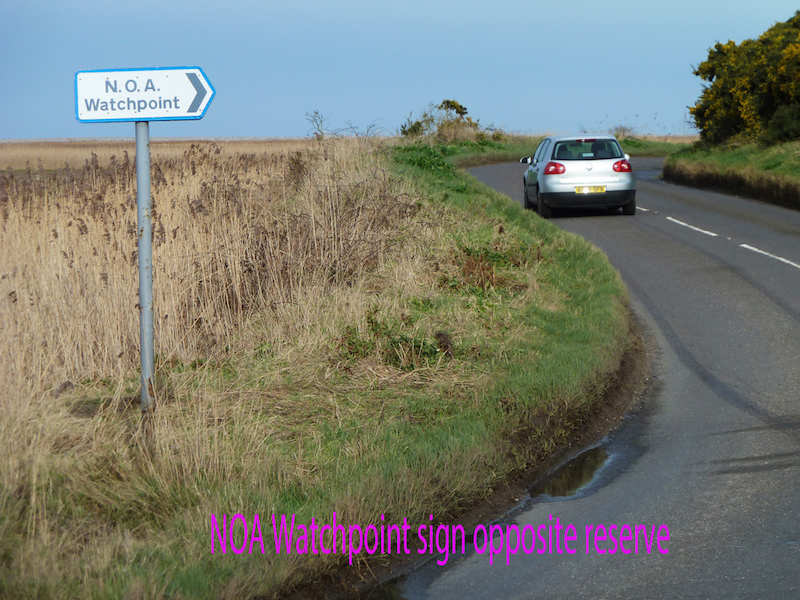 Parking is available on the roadside adjacent to the reserve. This is an ‘informal lay-by’, and does not belong to the NOA. It is quite small, with space only for 6 or so cars. There is no special provision for blue-badge holders. Nor are there any dedicated spaces for minibuses. There is physically room if not already full with cars. 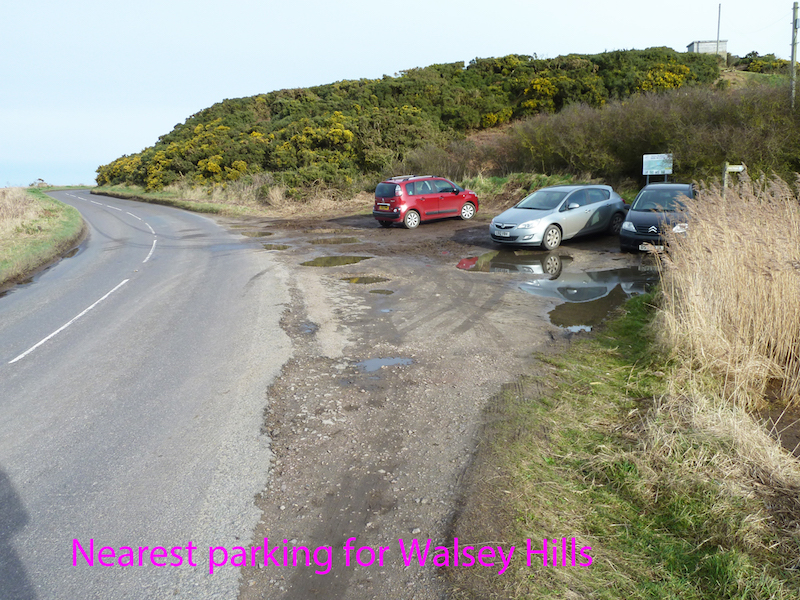 If the ‘layby’ is full there may still be room to drop off passengers. There is some roadside/off road parking at Salthouse village – about 1.5 kms to the east. For NWT members/visitors to Cley Marsh reserve there is parking at the Cley Visitor Centre about 1 km to the west, and a small NWT car park beside the Cley Marsh reserve East Bank, on the opposite side of the A149 from Walsey Hills.

Some of the ‘lay-by’ becomes very wet and muddy after rain and difficult to negotiate for the less able.

There is no public phone, and mobile phone signal can be very weak.

The reserve is currently staffed at weekends from March to November by an Assistant Warden, and volunteer wardens may be present on other days.

At times when the reserve is staffed, you can catch up with recent sightings by calling 01263 740875, but do bear in mind that the Assistant Warden or volunteer wardens may be working elsewhere on the site.

The NOA main reserve, at Holme-next-the-Sea, can be contacted as follows:

The nearest toilets are in the NWT Visitor Centre at Cley. There is a fully accessible toilet there. (But not ‘RADAR scheme”. It appears to be open access, but within the Visitor Centre, so only available during opening hours for the centre). 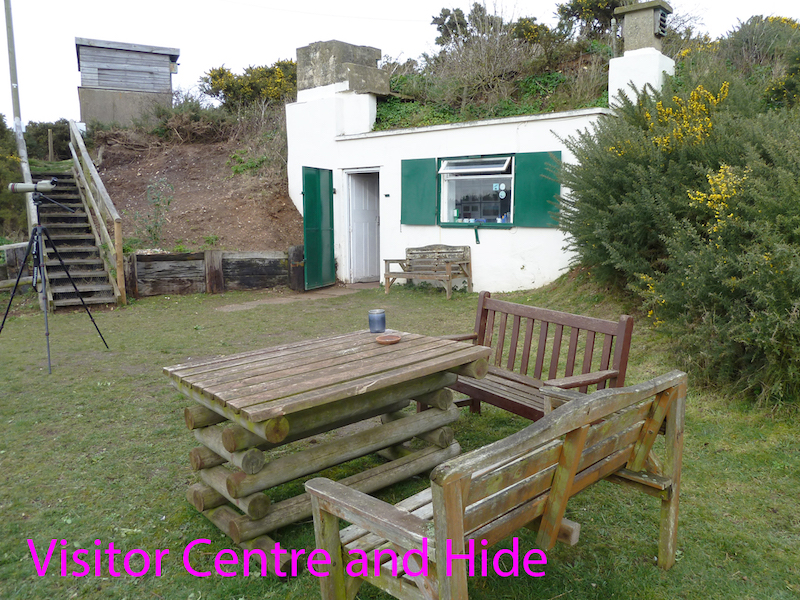 The former war time bunker is now used as a visitor centre, where bird movements and numbers are observed and recorded, together with information about insects and other wildlife. But it is not a visitor centre in the sense of being a shop and café.

There are some bench seats with back-rests, and a picnic bench, available at all times, outside the building.

The white building is where birds that have been caught in the mist nets are ringed, measured, weighed, and recorded, before being safely released. 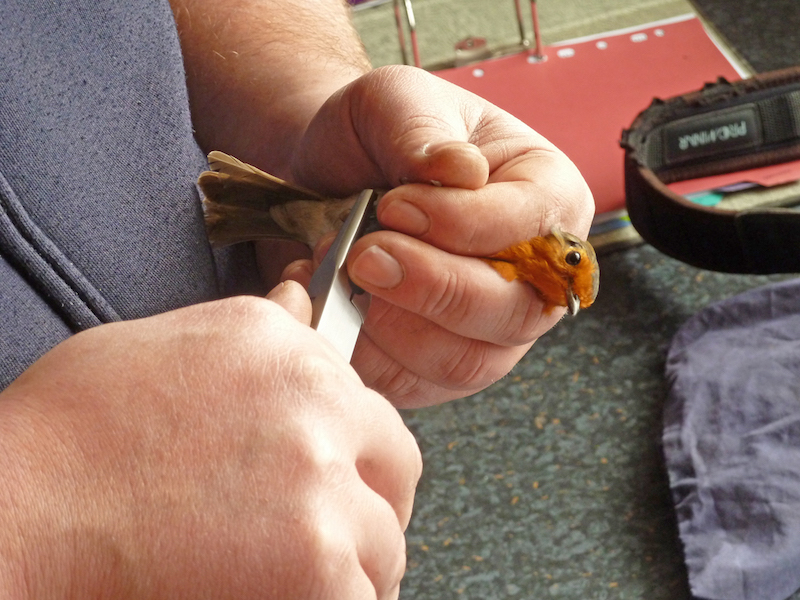 There is not a leaflet of the reserve. The board below is near the entrance to the reserve. Note the orientation of the map, with North to the bottom of the sign. This is correct. When viewing this board you are looking south, so everything appears in the correct position relative to the viewer. 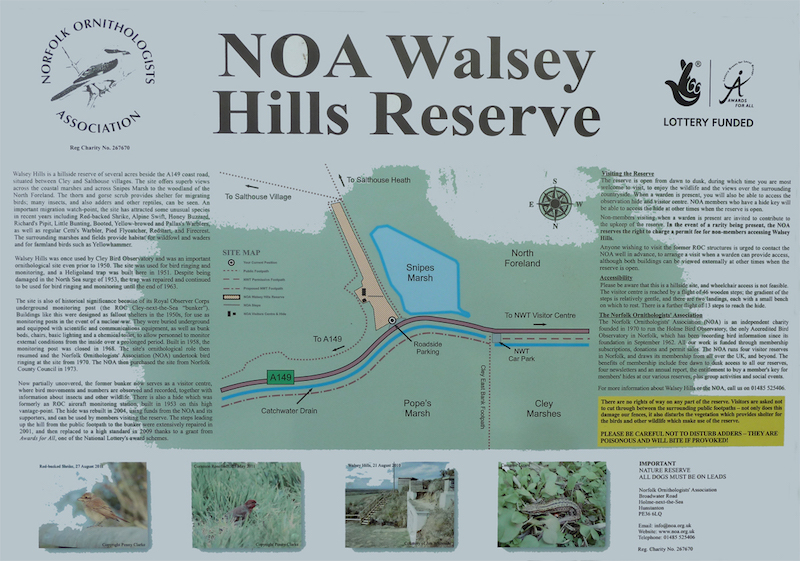 Guide dogs on leads are allowed. 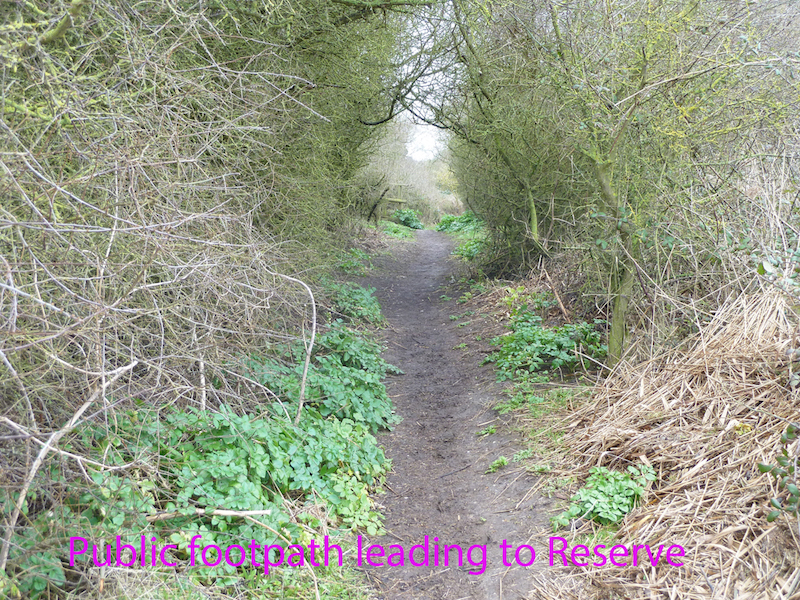 There is a small gate at the entrance to the reserve. This has a spring closure, but is easily opened and closed.

Once inside the gate there is a short length of boardwalk, then 46 steps that lead up the hill to the reserve centre.The stairways are all clear of overhanging material. The gradient of the steps is relatively gentle, and each step has plenty of room from front to back to be able to step up with both feet before moving up to the next step. The wooden steps are covered in wire netting to provide a safe grip. Each step is 120cms wide with handrails set at 115ms from the ground. What paths there are are flat or gently sloping. Most of the access ‘paths’ are actually flights of steps. There is always adequate room for people to pass in either direction. 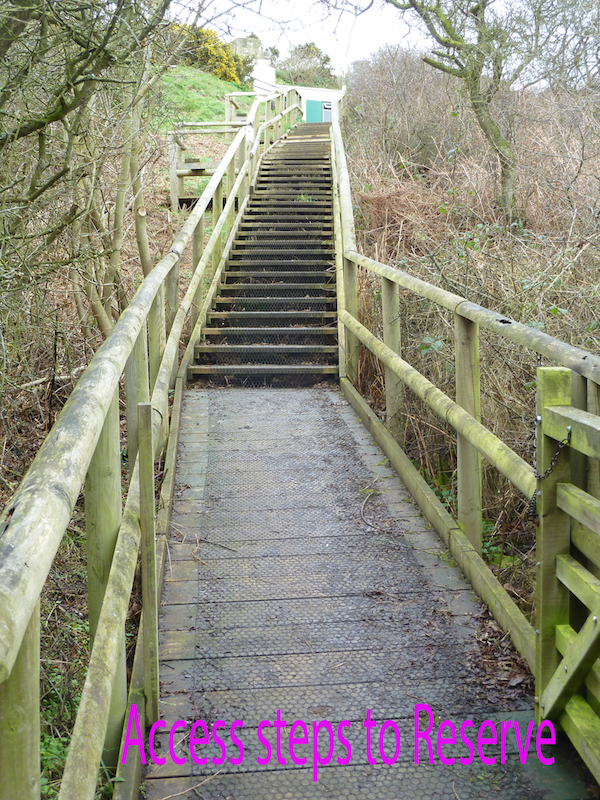 There are two landings, approximately one third and two thirds of the way up the main set of steps, each with a small bench with a back rest, on which to rest. (The upper one of these was fenced off, awaiting maintenance/repair, on the day of the survey.)

At the top of the steps there is a flat grassed area with three garden bench style seats with back rest and arm rests, outside the main reserve building/ringing lab. There is a further flight of 13 steps to a higher level to reach the hide. The seating in the hide is wooden perch stools, with no backrests. 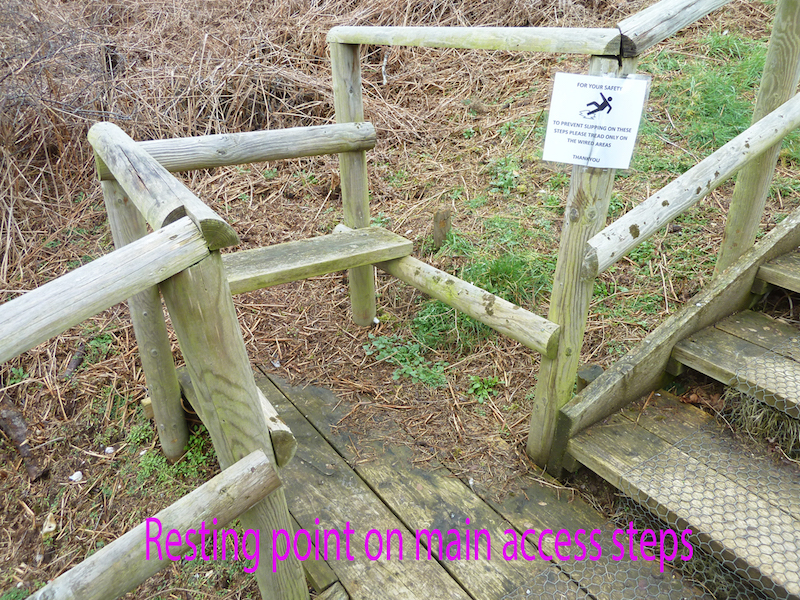 Trapping is carried out by erecting mist nets in openings in the scrub to the south of the buildings. This area is reached by another set of 36 steps leading down from the flat grassed area, but can be viewed quite well from the top of them. There is no access to this area when nets are erected. When birds are caught in the nets they are brought back up to the ‘visitor centre’, where they are ringed and their details recorded before being safely released.

From the upper reserve level, near the hide, there is a gently sloping path that leads through gorse scrub to join the public footpath heading east along the hill top.

Access is only on foot, by climbing steps as described above. There is no wheelchair access, due to the hilly nature of the terrain.

Wooden perch stalls are provided. Due to the nature of the building, with its concrete base (a legacy of its origins as a military observation post), the openings are a little higher than in ‘standard’ hides.

The hide gives good views in most directions, but many visitors would be happy to remain outside, where they can more easily switch viewing directions on this hilltop site. 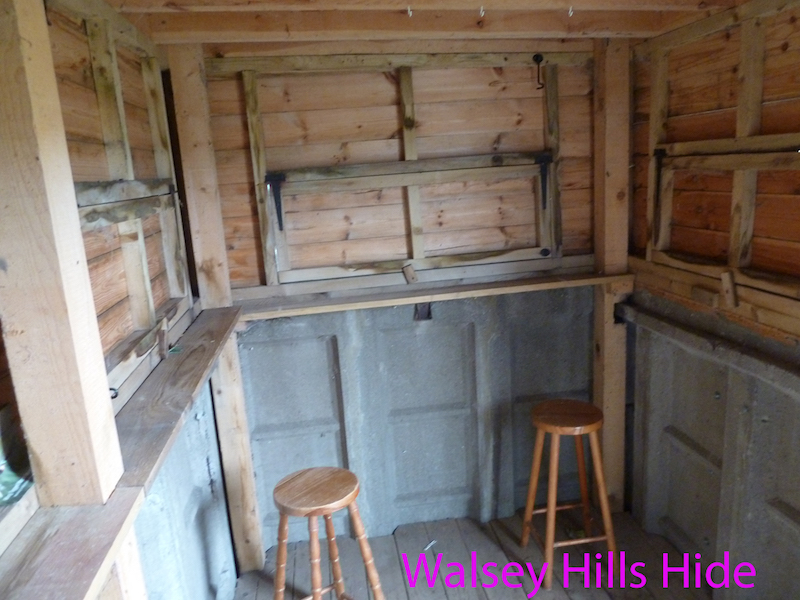